Beneath Southern Skies- Contemporary Romance set in Australia
Book 3-Leah in Love (and trouble)
Book 2--A Dream for Lani
Book 1-Lonely Pride
Violet Amelia Connor, known to all as Leah, is a landscape designer who inherited her love of gardening from the eccentric aunt she lives with. Leah is contracted to work on the garden of Private Investigator Sean Russel and unwittingly becomes embroiled in the handsome PI’s cases. A series of unpleasant experiences land her in real trouble where she is kidnapped, bashed, bound and altogether becomes a party to such mayhem she is forced to wonder how she ever got mixed up in this mess. But her indomitable spirit, obstinate nature, and incurable sense of humor enable her to override all obstacles. And of course there is her overwhelming attraction for Sean Russel that started it all.
Previously published as Shrinking Violet this book was a finalist in the Romance Writers of Australia’s Romantic Book of The Year in 2006.

Russel lay where he’d dropped, and I crawled over to him. He looked unconscious. Lord, what now? I patted his cheek and he groaned.

I ran to the kitchen. It was lovely—good grief, what was I doing admiring his copper pots and pans and timber cupboards? I found a bowl in a cupboard and filled it with water and grabbed a small cloth from the draining board.

He was still groaning when I got back. “How are you?” What a stupid bloody question. Why do we ask such inane things at times like this?

“Just bloody wonderful,” he grumbled through his split lip. Who could blame him for being pissed off?

“You look it.” I dabbed at his split lip with the damp cloth and he flinched. “I’m sorry.” I did what I could with the cloth, which wasn’t much, but at least it stemmed the small flow of blood that had come from his mouth. “You’re going to have a lovely shiner.”

Wasn’t that the truth? The area around his left eye was already turning black and blue. “I didn’t think lawyers got beaten up by thugs. What did you do, lose a case for them?”

“I haven’t a clue where you got the idea I’m a lawyer,” he mumbled as he tried to rise. He groaned louder as he got onto his elbows.

“Well, I don’t know—it seemed logical.” I put an arm about his middle as he struggled to sit up. He was all muscle. I cringed when he made a sound like a wounded bull. I’ve never been punched in the stomach, but once ran into a post that knocked all the breath out of me, so could imagine it was pretty painful.

“Logical? At another time I will question your logic, but right now all I want is to lie down.” He looked and sounded ill. “I know it’s an imposition but do you think you could help me to my bedroom?”

He had to be joking? Imposition? Not only was I going to get the chance to see inside his private domain, but was also going to help him there. With ill-concealed pleasure I helped him up.

It was a struggle, but we finally made it. The room was pure masculine and done out in blues and greens, my two favorite colors. His bed was about the largest I’d ever seen. The chest and robes were mahogany, obviously expensive.

I helped him onto the bed, painstakingly lowering him so as not to hurt him any more. As I bent to take off his shoes a strange sensation went through me. It was two years since I’d been this close to a man.

He winced as he lay back. “Just help me off with my sweater.” I shrugged aside my disappointment and did that. The soft shirt he wore beneath showed a vee of dark hair on his chest. Not a lot, but just enough to be pleasing. I’m not too keen on very hairy men, but don’t mind a few to curl my fingers in.

I shook my head—I must be going silly. I felt like a schoolgirl getting her first glimpse of a male chest. He closed his eyes and let out a long sigh.

“Would you like anything?” My hopes rose, perhaps he wanted someone to cuddle and comfort him.

“No, this’ll be fine. Thanks.” My hopes were dashed.

Please take a moment to hop over to these blogs to read more snippets from amazing authors:


Click on logo to visit my Books We Love page: 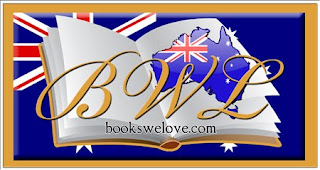 Or visit my webpage to read excerpts and reviews.

Posted by Tricia McGill at 03:30 No comments: