Inside Books We Love: Tricia McGill—there’s no place like home.

Inside Books We Love: Tricia McGill—there’s no place like home.: Or is there?  It occurred to me lately that I live in a very confined area. I don’t drive distances as I once did, and tend to st...
Posted by Tricia McGill at 10:22 No comments: 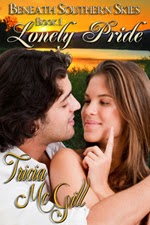 Lonely Pride--Book 1 in my Beneath Southern Skies Series
$1.99 for a limited time. Click on cover to visit the KINDLE purchase page.

This series is set in Australia, my homeland.

Sam fell in love with Mac at first sight when she was still a child and he a teenage boy, almost but not quite a man. A special bond formed between them, fuelled by their mutual love of animals—especially horses. As each matured, that bond threatened to move beyond the limits of friendship. By the time Sam reached her 17th birthday she was desperately in love with him, her shining hero. But one awful night Mac betrayed that love and Sam was unable to find it in her heart to forgive him. By the time the truth was revealed they had both moved on with their lives, and Sam’s pride prevented her from forgiving Mac; threatened to ensure her a lonely future.

"Ms. McGill has written very real characters. You can relate to them and the problems they are dealing with. She has created a world that is believable. I love the scene of Mac telling Sam how he feels and she finally realizes what she felt all those years ago was that she hadn't wanted to grow up. She had wanted everything to stay the same. Ms. McGill tells a story that touches your heart.”  Donna Fallen Angels Reviews

Sam couldn’t sit still. With a nervous gesture she rose to stand in the middle of the room, her fingers fidgeting with the gold chain around her neck. “Can I get you another beer?” she offered, not meeting Mac’s eyes. Flicking a strand of hair behind an ear she paced about.
“No, this will do me for now.” Patting the cushion at his side, he said, “Come and sit down for God’s sake. Let’s talk.” His smile was meant to tempt, she guessed. Without thinking, she obeyed his soft command, her body rigid, her knees pressed together.
“So, do you love this Peter guy?” he asked abruptly.
Sam turned to glare at him. “I’m thinking of getting engaged to him aren’t I?”
“So you say.” He shrugged. “But that wasn’t what I asked.” Suddenly he moved until their bare legs touched, making her skin burn where the rough hairs on his solid thigh brushed her sensitive skin. “I don’t believe you’re in love with him.” She wasn’t sure if it was the flickering candlelight playing tricks, but for a moment dangerous sparks glinted in his eyes. That was so unlike Mac it shocked her.
“Generally when people get engaged they’re in love.” Sam wondered just why she was fabricating these inane responses, when she knew she had no intention of going steady with Peter, let along making their relationship official.
“Generalizations don’t apply here,” he pointed out. “It’s my belief they tend to skim the surface and rarely touch on the truth. And the truth is you aren’t in love with this guy.”
Sam stared at him. “I don’t give a damn what you believe!” She made to rise but he stopped her with a firm hand on her wrist.
“Yes you do. Fight the truth all you will, but don’t ever delude yourself into believing you can sweep what we felt for each other away as if it never existed.”
Sam struggled against the warm clamp of his fingers. “What utter conceit! I can forget what we meant to each other as easily as I can forget...” With a quick glance about, she finished hotly, “What I had for dinner last night.”
“Rubbish.” The word flicked out like a whiplash. “Is that why you touched me earlier as if you couldn’t get enough of me? Is that why you’re trembling now because I’m touching you.” He ran a finger down her cheek.
Sam flinched. “I was stunned by the near accident.” She lifted her chin stubbornly. “And you’re hurting me now.”
“Oh no, Sam. You’re pretending you’re an enemy and spitting venom like a deranged snake, but I have nothing wrong with my senses. Whether you admit it or not your body is sending mine messages it can’t mistake. You want me as much as I want you.”
“You’re so mistaken. And as far as I can recall it wasn’t me doing the touching earlier, but you.” She decided to forget she’d been as eager to return his kisses as he’d been to give them.
He grunted softly. “Are you as uninhibited with this Peter guy as you were with me?” His thumb traced disturbing circles over the heel of her hand and she tried to drag free again, futilely. “Do you satisfy all his male needs? I take it you’re sleeping with him?” His brow furrowed as if that thought angered him.
“That’s none of your damned business!” Plucking at his fingers, she cried, “Will you please let go of me, you’re hurting me.” He wasn’t, but she really needed to get away from him—and now.
But rather than loosening, his grip tightened. “Once upon a time everything you did was my business, as everything I did was yours.” His voice was cold, his expression as hard as steel.
“That was long ago, and has no significance.” As she moistened suddenly dry lips she watched the color flare along his jaw line.

Visit Tricia's web page for more of her books
www.triciamcgill.com