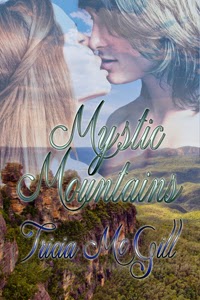 Click on cover to go to KINDLE buy page and read more reviews.

In the early 1800s the penal colony of Botany Bay was an unforgiving and harsh place. Isabella O'Shea is transported to New South Wales for wounding a member of the British aristocracy who raped her, so it is understandable that she loathes members of the upper class and the system that punished her; sentenced her to seven years transportation.
Tiger Carstairs is rich, ambitious and English-so is it any wonder she is determined to hate her new master. Tiger dreams of making a new life beyond the aptly named Blue Mountains, so called because of the perpetual haze of blue surrounding them.

Mystic Mountains is a story of courage and persistence-traits that were essential for the settlers who carved out a new life in a raw land where suffering and heartbreak were commonplace.
~~~~~~~~~~~~~~~~~~~~~~~
Ignoring the others as they tossed ribald jokes about the armed soldiers back and forth, Isabella tidied her hair as best she could with her fingers. How she longed for a bath; she'd give her right arm to be able to sink herself into a tub of warm fresh clear water instead of salt water.
"All right, enough primping," a guard said, smirking as he poked her on the shoulder. "Up you get and go over to the table when your name's called. No hustling, an' behave yourselves. You never know, the guvner his self may pick you." One of his comrades gave him a dig in the ribs and they both chortled.
Isabella let the contempt she felt for him show as she picked up her bundle and slowly rose. If she didn't know she would get clapped in irons she'd spit in his ugly pig's eyes.
The women shuffled about, and the baby began to bawl loudly. Isabella spotted Dougal among the crewmen who'd just unloaded some cargo from one of the longboats.
Her friend was frowning and she sent him a wan smile. He looked about, then waved discreetly, mouthing, "You all right?"
Isabella nodded warily. Would she ever be all right again? Had she ever been all right in her whole life? At nineteen she sometimes felt as if she'd lived a hundred years; most of them with an empty stomach, and heavy heart.

Format:Kindle Edition|Amazon Verified Purchase
"I really loved this book (previously published as Blue Haze but re-published as Mystic Mountains). It was like Pride and Prejudice...ooops, I mean Arrogance and Obstinacy, meets the Thorn Birds in 1818 Australia. I love realistically flawed characters--perfect romance H/h's are such bores--and both of these were so realistically flawed, the way their life experiences from their past hard-scrabble youth carried over to lead to inappropriate and sometimes foolish judgments in their present was so well developed into the plot of this book. Now I shouldn't love it as much as I did. There were a few things in this book that I really hated, but I can't say without spoilers, that should have made me downgrade my rating--however, any book that keeps me up to 3:30 AM to finish, because I just can't put it down, definitely rates five-stars. This is also the kind of book that will make the next few books I read seem like they don't measure up."
By Janet Orosz  5 stars

Format:Kindle Edition|Amazon Verified Purchase
"Tricia McGill is an outstanding author who writes with passion and clarity. I've read many of her books and loved every one."
By Ginger Simpson  5 stars