Books You'll Love from Books We Love: May the Luck of the Irish Be With You!

Books You'll Love from Books We Love: May the Luck of the Irish Be With You!:        Luck of the Irish Contest Running now through March 14 One winner will receive this Savor...
Posted by Tricia McGill at 13:48 No comments:

Books You'll Love from Books We Love: Lots of Great 99 Cent Reads this Weekend: Catch all your favorite BWL authors during the Kindle Countdown Deals, where books range from 99 cents to 1.99 at various times. Click here...
Posted by Tricia McGill at 13:10 No comments:

Books You'll Love from Books We Love: Great Reviews for Mystic Mountains by Tricia McGil...: " I really enjoyed this book. The writing flows, and the story is compelling." ~ 4 Stars, S. Harrison, Amazon " It is a...
Posted by Tricia McGill at 13:08 No comments: 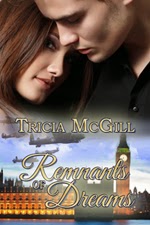 Remnants of Dreams moves from the horrors of the 1914-1918 war to the 1990s, and paints an unforgettable picture of a changing world and of working class people in North London whose only riches are love and the knowledge that they did their best.
Alicia’s indomitable spirit sustains her and her large family through two wars, illness, death and loss. From her mother’s example Sara finds the courage to escape an intolerable situation and forge a new life in a new country.

Remnants of Dreams was previously published as Traces of Dreams and in 2003 won the Romance Writers of Australia's mainstream Romantic Book of The Year.

"I loved this story, although there were times when I felt tears welling in my eyes and an enormous lump in my throat. This story touched me deeply, and I won't forget it. Watching a family struggle so desperately is not easy, but seeing them triumph over tragedy is uplifting. I enjoy long, intense family sagas like this. Tricia McGill writes so realistically that the joys and sorrows portrayed made me laugh and cry. This is a novel of great emotional depth." Kay James for Romance Reader at Heart

"If you think this is a predictable novel you will miss not only a sweeping story of joy and sorrow, triumph and tragedy, but also an amazing overview of the century seen through a family saga. Tricia McGill takes a bold step into mainstream fiction with this book that flows like a gentle stream on the surface, but conceals a strong undercurrent and unexpected depths." Mary Allyce

"Miss McGill continues the tradition of Angela's Ashes with this intimate look of two generations facing the grim threat of war. It deals with the heartbreak of death and the recovery only love can bring. At moments it's tear jerking, but you won't want to stop until the last page, to learn how they juggle both the heartache and the romance. Ultimately, it offers the reader a strong lesson on never giving up. No matter how many troubles impact the reader's life, there's always a silver lining. If you like books like Angela's Ashes or sagas like Cold Mountain or Memories of a Geisha, this is the book for you. It'll hold your interest in a tight grasp, and not let go until the last page." Timeless Tales

Sara followed him to the small kitchenette at the back of the house. Brian had built cupboards along one side and Sara ran her fingers along the pale yellow bench top as she leaned against the wall that was covered with pretty floral wallpaper.
"This is so nice." She looked about admiringly as he filled the kettle and lit the burner on their new stove. "You've made a good job of it."
"Thanks." He turned to close the door. Sara shivered and he asked, "Are you cold?" The room wasn't very large and he seemed twice as big in the cramped space.
Sara shook her head, looking down as one of his large hands reached for one of hers. "Your skin is so white," he muttered, and she began to tremble all over. His palms rubbed up and down her arms then and she could feel the small calluses on them.
Goose bumps rose all over her skin. "Why, you must be freezing," he said softly, his voice growing husky, as if he had a catch in his throat.
"No." As she denied this a tendril of her hair brushed his face and he gave her a startled look. His fingers seemed to have a life of their own, for they wandered slowly on her skin, exploring. Sara sighed with pleasure. Brian stared at her mouth.
"Don't look at me like that," he scolded, meeting her eyes. He'd moved so close his warm breath stirred the hair at her temples, wafted over her face.
"Like what?" Her voice sounded low and husky, and somewhere deep inside a pulse throbbed.
His palms cupped her jaw and his thumbs began to stroke her cheeks. "I hope I'm mistaken, but all my senses tell me I'm not."
"You're not, and you know it," she whispered. "From the first moment I set eyes on you I wanted you for my own. I could have killed Jane for getting you."
"But you're married to Dennis and I'm married to your sister--it's much too late for these declarations," he rasped, his hands moving to her shoulders and cupping them to shake her.
"And I hate him!"
"Ah, love." He swallowed hard. "But you're stuck with him, Sara, and I'm..." He lifted his shoulders in a helpless shrug.
"We could run away together. You, Rosy, and me," she broke in desperately, her eyes widening hopefully.
"Don't be daft, love." He turned to move away.
Sara grabbed his arm and protested, "Don't tell me you don't feel something for me. I can see it in your eyes. You feel the same as me."
His fingers curled about her upper arms as he brought his face so close she could see her reflection in his eyes. "You're a witch, Sara. And you're so beautiful you would bewitch any man with half a mind and a pair of eyes. But don't run away with the idea you can charm me into jumping through hoops for you. Because I won't be in it, do you hear me?"
She couldn't hold back the tears. She began to sob. His fingers tightened on her arms as he said savagely, "I couldn't ruin the lives of loved ones by being so selfish." He swallowed again, this time convulsively, then dragged her into his arms, whispering hoarsely, "God Sara, don't cry. It's the way it is, and we can't do anything about it."
His voice broke, and Sara began to cry all the more. With an anguished groan of surrender he bent to take her mouth with a kiss that was almost savage.
Sara clung to him as her legs grew weak, a small moan rising in her throat as his hot mouth devoured her. The world fell away. His arms closed so tightly around her she couldn't breathe. But she didn't care; didn't care if she died now. Her head spun as he pushed her against the wall, his hands frantic as they ran up and down her body.
"Brian," she cried, something akin to triumph coursing through her as a wild madness swept through her veins. His heart thumped erratically beneath her palms as she pressed them flat against his chest, and his body was as hot as a furnace.
With trembling hands she started to unbutton his shirt.
Suddenly his body went rigid and he dragged his mouth from hers, his hands stilling as he stared down at her from desire drugged eyes.
"Oh my God!" He swore viciously beneath his breath. "This is wrong." He staggered back a pace, his breathing uneven. The kettle was sending out clouds of steam and absently he turned off the gas. She could see he was trembling as violently as her as he pushed his hair back.
Sara knew this was the last chance she would ever get to fight for him, and she wasn't about to give in so easily. "I love you, Brian. Desperately. I'd do anything for you!" She reached for him, wrapping her arms about his middle.
"Oh Sara, love," he rasped, rubbing a thumb across her parted lips. "This is foolish, just foolish." But as if driven by needs beyond his control he began to kiss her again, as if starved for her, for the taste of her.
Posted by Tricia McGill at 11:36 No comments:

Books You'll Love from Books We Love: New Interview with Tricia McGill: Award winning author Tricia McGill was born in London, England, and moved to Australia many years ago, settling near Melbourne. Hor...
Posted by Tricia McGill at 10:57 No comments:

Books You'll Love from Books We Love: Excerpt from Mystic Mountains by Tricia McGill: In the early 1800s the penal colony of Botany Bay was an unforgiving and harsh place. Isabella O'Shea is transported to New South Wa...
Posted by Tricia McGill at 10:41 No comments: